For quite some time my grandad has been telling me about his old cinefilm camera which he acquired in the 60’s. I say 60’s because he has some footage of my mom on some old 8mm film and she was born in 1964 (sorry mom).

Today i went to see my grandparents and he pulled out this beautiful and in mint condition Eumig C3-M CineCamera.  Absolutely stunning! A small winding gear turns to wind the film on, setting the FPS and releasing the shutter gives a glorious clatter as the gears then wind the film and respectively expose it.  There are 3 lenses to choose from attached to the camera,  the viewfinder is terribly small and the coverage is something to be desired however just listening to it wind on made me go gooey inside! 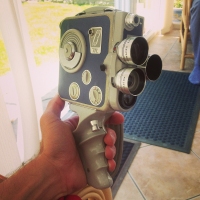 What really made my heart flutter though is when he pulled out some vintage KodaChrome. 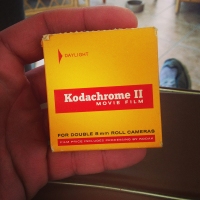 The colours and reproduction of this film is so attractive to me and i would love to have included some KodaChrome in this project.  The moment i fell in love with KodaChrome was once i saw the world famous National Geographic 1984 front cover photograph ‘Afghan Girl‘ by Steve McCurry. Shot with Nikon at F/2.5 the colours are saturated and contrasty. This combination gives an exceptionally strong image.

To view the Nat Geo documentary on the last film put into production and how McCurry carefully shot each frame visit Nat Geo: The Last Roll of KodaChrome

I was gutted when KodakChrome was discontinued,  until 2010 there had been only 1 lab in the entire world that would process KodaChrome due to the different processing it required.

If my Grandad is okay with using his CineCamera I’m considering using it for my project in the future, ill do some research first on development labs and film around at the moment. Exciting!

This site uses Akismet to reduce spam. Learn how your comment data is processed.